6. Prime numbers: A counting number is prime if has exactly two factors, itself and 1.

7. Composite Numbers: All counting number which is not prime, are called a composite number.

A composite has more than two factors.

8. Co-prime: Two numbers whose HCF is 1 are called co-prime numbers.

9. Rational Numbers: Numbers that can be expressed in the form of p/q, whose p and q are integers and q≠0, are called rational numbers.

10. Irrational Numbers:- Numbers which when expressed in decimal would be in the non-terminating and non-repeating forms are called irrational numbers.

Zero is not positive, nor negative.

A Prime number is a natural number with exactly two distinct natural number divisors: 1 and itself. Otherwise, a number is called a composite number. Therefore, 1 is not a prime, since it only has one divisor, namely 1. A number n>1 is prime if it cannot be written as a product of two factors a and b, both of which are greater than 1: n = ab.

• Note: only positive numbers can be primes.

• There are infinitely many prime numbers.

• The only even prime number is 2, since any larger even number is divisible by 2. Also 2 is the smallest prime.

• Any nonzero natural number n can be factored into primes, written as a product of primes or powers of primes. Moreover, this factorization is unique except for a possible reordering of the factors.

• Prime factorization: every positive integer greater than 1 can be written as a product of one or more prime integers in a way that is unique. For instance integer n with three unique prime factors a, b and c can be expressed as n = ap*bq*cr, where p, q, and r are powers of a, b, and c, respectively, and are >1.

• Verifying the primality (checking whether the number is a prime) of a given number n can be done by trial division, that is to say, dividing by all integer numbers smaller than √n, thereby checking whether n is a multiple of m<√n.

• If n is a positive integer greater than 1, then there is always a prime number P with n<p<2n.

• Every integer is a divisor of itself.

• Every integer is a divisor of 0, except, by convention, 0 itself.

• A positive divisor of n which is different from n is called a proper divisor.

• An integer n > 1 whose only proper divisor is 1 is called a prime number. Equivalently, one would say that a prime number is one which has exactly two factors: 1 and itself.

• Any positive divisor of n is a product of prime divisors of n raised to some power.

There are some elementary rules:

Finding the Number of Factors of an Integer

First make prime factorization of an integer n=ap*bq*cr, where a, b, and c are prime factors of n and P, q, and r are their powers.

Finding the Sum of the Factors of an Integer

First make prime factorization of an integer n = ap*bq*cr, where a, b, and c are prime factors of and p, q, and r are their powers.

The sum of factors of n will be expressed by the formula:

There are some tips about the perfect square:

• The number of distinct factors of a perfect square is ALWAYS ODD.

• The sum of distinct factors of a perfect square is ALWAYS ODD.

• A perfect square ALWAYS has an ODD number of Odd-factors and EVEN number of Even-factors.

• Perfect square always has an even number of powers of prime factors.

2 – If the last digit is even, the number is divisible by 2.

3 – If the sum of the digits is divisible by 3, the number is also.

4 – If the last two digits form a number divisible by 4, the number is also.

8 – If the last three digits of a number are divisible by 8, then so is the whole number.

• Note: The factorial of negative numbers is undefined.

The number of trailing zeros in the decimal representation of n!, the factorial of a non-negative integer n, can be determined with this formula:

Finding the number of powers of a prime number P, in the n!. 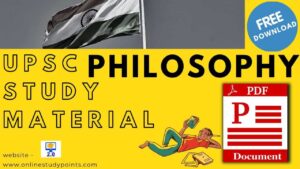 UPSC PHILOSOPHY Carvaka NOTES   Our post is related to the UPSC exam! ( PHILOSOPHY

UPSC PHILOSOPHY YOGA NOTES   Our post is related to the UPSC exam! ( PHILOSOPHY

We use cookies on our website to give you the most relevant experience by remembering your preferences and repeat visits. By clicking “Accept”, you consent to the use of ALL the cookies.
Cookie settingsACCEPT
Manage consent

This website uses cookies to improve your experience while you navigate through the website. Out of these, the cookies that are categorized as necessary are stored on your browser as they are essential for the working of basic functionalities of the website. We also use third-party cookies that help us analyze and understand how you use this website. These cookies will be stored in your browser only with your consent. You also have the option to opt-out of these cookies. But opting out of some of these cookies may affect your browsing experience.
Necessary Always Enabled

Performance cookies are used to understand and analyze the key performance indexes of the website which helps in delivering a better user experience for the visitors.

Analytical cookies are used to understand how visitors interact with the website. These cookies help provide information on metrics the number of visitors, bounce rate, traffic source, etc.

Advertisement cookies are used to provide visitors with relevant ads and marketing campaigns. These cookies track visitors across websites and collect information to provide customized ads.

Other uncategorized cookies are those that are being analyzed and have not been classified into a category as yet.